How emotions are key after a failure 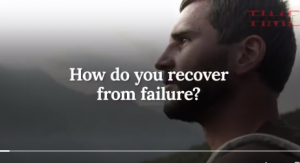 Time magazine published an article and posted a video on how our emotions respond to failure. After watching the video, I wanted to know more on the subject and how when we focus on our emotions versus on our cognition, it changes our attitude and actions after experimenting failure.

Last year, I wrote an article on the topic after meeting with a French organization dedicated to entrepreneurs who had failed and how they’d learn from it to better succeed in their future. Therefore I was very interested in the emotional approach. The study was published early Septembre 2017 in the Journal of Behavioral Decision Making and untitled Emotions Know Best: The Advantage of Emotional versus Cognitive Responses to Failure.

The power of emotions

We commonly agree that cognition will often save us from failing. But here, what is particularly interesting is that the 3 scientists explain that concentrating on cognition after a failure can prevent improvement. They show how emotions have a positive changing power. We learn better from them, increase our efforts and eventually succeed!

If you haven’t already, read or watch Elon Musk’s video « How not to land an orbital rocket booster » posted on the SpaceX Youtube and his Twitter account Sept 14, about failure.